Followup on Donovan women from Lissalohorig

In a previous post I described the family of Denis Donovan of Lissalohorig and Catherine Collins, who was from Lower Lissane. That post suggested that Catherine was the daughter of Humphrey Collins of Lower Lissane and Johanna Barnane. Johanna was probably from Drinagh.

The known Donovan family consisted of six daughters and one son. So far, I have not been able to follow up on daughters Julia, Johanna, and Catherine and son Cornelius. Some information has been found about the remaining daughters.

Mary Donovan of Lissalohorig (b 1852) married John Bohane  26 Feb 1884. In addition to Killaderry, Castlehaven, it appears the family spent some time in Callaros Oughter, Goleen. Among their known children were:

The McCarthys of Mohanagh

Mary Bohane (1889) married Daniel McCarthy 13 Apr 1920. They were in Lissalohorig at the time. Their daughter Mary Philomena went on to marry Patrick Caverly of Cooranuller.

Daughter Maria Hegarty married Denis McCarthy 24 Nov 1927.  They may have lived in Angram and had a number of children, but this line of investigation has not yet been pursued.

Captain Francis O'Neill, the famous Irish musician and Chicago policeman, was from Trawlebane in Caheragh parish. There is an organization devoted to preserving his memory, including the memorial in Trawlebane.

He was baptized Daniel on August 30, 1848, the youngest child of the family of John O'Neill and Catherine Mahony, who married in Caheragh on April 6, 1834. The Mahonys resided in Kealanine, near Castledonovan.

Catherine's father was known as Daniel O'Mahony Ciánagh Mór. The family were known for their love of music. (I think this is all documented in Captain Francis O'Neill's book on Irish Folk Music. Check the web and Google book archives.)

Catherine's mother was known only as Mary Mahony. I cannot tell if that was also her maiden name. Daniel and Mary both died about 1857. They were eventually interred in Enniskeane. I do not know if that is where these Mahonys were originally from.

The marriage record for Daniel and Mary as well as the baptism records of their children probably have not survived. I did a search for Mahonys as witnesses in the records of the Trawlebane O'Neill family, as well as other Mahonys out of Kealanine, wondering if perhaps they could have been relatives of Catherine.

A Daniel Mahony and a Mary Mahony witnessed the 1834 marriage of John O'Neill and Catherine Mahony.

John Mahony was godfather to Philip O'Neill on January 27, 1835.

Daniel Mahony was godfather to Michael O'Neill on January 15, 1841.

Ellen Mahony was godmother to Catherine O'Neill on September 19, 1843.

A John Mahony married Margaret Hourihane in Drimoleague & Drinagh on March 3, 1840, before witnesses Daniel Mahony and Pat Hourihane. They lived in Kealanine.

The O'Mahonys in the ancestry of Captain Francis O'Neill have NOT been conclusively identified in this research expedition. But the data could be circumstantial evidence of a sibling relationship between Catherine Mahony O'Neill, John Mahony, Norry Mahony Canty, and Johanna Mahony McCarthy. There is also some encouraging genetic data from known descendants of Johanna Mahony McCarthy and Catherine Mahony O'Neill showing an excellent match (centiMorgans in the low triple digits). However, rural Ireland being what it is, these two DNA test takers appear to be related in multiple ways. Genetically isolating the Mahony relationship - if there is one - is just not possible with the data currently available.

There are other Mahonys who resided in Kealanine, but their records don't exhibit obvious familial ties to the aforementioned Mahonys. Much more evidence is needed to make a case for the family of Catherine Mahony O'Neill, but at least this is a start.

The Sweeneys of Lakelands

It is believed Michael and Daniel were Ellen's brothers. The extended family is being modeled on the assumption that Ellen was baptized January 22, 1815 and that her parents were John Hurley and Jane McCarthy. There are no baptism records to confirm the parentage of her assumed siblings.

The Sweeneys resided in Lakelands and Kilnaclasha. Their known children were:

Eugene Sweeney was a godfather to a relative, Kate Hurley of Coolnagarrane, on September 30, 1878.

One of the problems with researching this family is that there was a doppelganger family in Letter (Clooncugger), and it is easy to get the two families mixed up since they resemble each other so closely.

Eugene's doppelganger married a Catherine Regan in 1883. There is a record of Eugene Sweeney, deceased father John, marrying Mary Duggan in 1886.

After that, the Sweeney trail goes ice cold.
Posted by sb10 at 9:53 AM No comments:

Thomas Sullivan certainly looks like a son of Daniel Sullivan and Margaret Keohane. Thomas died 19 Apr 1918, aged 84. That puts his birth year back to about 1834, predating the availability of Castlehaven & Myross baptism records. From a civil registration record, we know that Thomas, and Catherine Coakley, married 20 Feb 1873. He was from Myross, she was from Maulatanvally in Ross. His father was Daniel.

Notice Ann Barry the godmother in 1879. She was probably the Ann Sullivan mentioned in the prior post. If I am correct she was a younger sister of Thomas Sullivan. 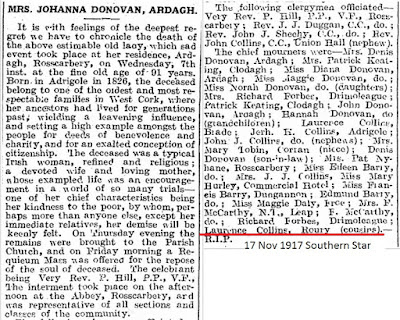 The Johanna Collins Donovan of Ardagh, mentioned here, was a daughter of Larr Collins of Adrigool. Among her brothers were Jeremiah and John and among her sisters was a Catherine Sullivan, who married another Daniel Sullivan and lived in Laherdane.

It certainly looks as if the Collinses of Adrigool had Sullivan relatives from Myross, but the exact nature of the relationship remains unclear.

Notes on Daniel Sullivan and Margaret Keohane of Myross

A 17 Nov 1917 obituary of my great-great-grandfather's sister, Johanna Collins Donovan of Ardagh East, Ross, mentions numerous cousins. Among them were 1. Mrs. Pat Nyhane of Rosscarbery; 2. Miss Eileen Barry Rosscarbery; 3. Miss Frances Barry of Dungannon; 4. Edmond Barry of Dungannon; and 5. Miss Maggie Daly of Froe. There were numerous others mentioned, but I'll focus on these.

1. Mrs. Pat Nyhane was Agnes Barry. She was the daughter of James Barry and Eliza Sullivan. James and Eliza married 30 Jan 1877 at Union Hall. Witnesses were Ann Coakley or Courtney, and James Barry. His father was John, her father was Daniel. Eliza's age was written as 23, which would have placed her birth year around 1853.

The godmother of the first child, John, was Margaret Keohane.

3. Frances Barry of Dungannon was the daughter of John Barry and Ann Sullivan. John and Ann married at Union Hall on 31 May 1870. Witnesses were Edward Barry and Elizabeth Sullivan. His father was John, her father was Daniel. John and Ann and their family lived in Benduff. Margaret Keohane was the godmother to the second child Kate, baptized 28 Jun 1872. Frances was born about 1887.

4. Edmond Barry of Dungannon was a brother of Frances. He went to live in Dungannon, with their uncle David's family.

The Barrys mentioned here may have been descended from John Barry and Mary McCarthy of Dungannon. A search of online records of Kilmacabea & Kilfaughnabeg reveal a family that appears to fit, though I cannot find a son James. For completeness, here they are:

I've researched John, David, Edmond, and Honora and have a little info on Ellen. But the only Barry descendants mentioned in the obituary were descended from John and a James, and a baptism for James cannot be found in the Dungannon family. These two men married two Sullivan women who appear to have been sisters. So it is not clear if the relationship between Johanna Collins Donovan was with the ancestral Barrys or with the Sullivans.

Daniel Sullivan and Margaret Keohane lived in Myross. There is no known surviving marriage record. Their known children, in the Castlehaven & Myross records, were:

Daniel and Margaret may have been the godparents of Patrick Sweeney, 30 Sep 1871.
A baptism record for Eliza is missing but as previously mentioned, other records estimate her birth around 1845 or 1853.

Baptism records for a John Sullivan in Bantry in 1833 and for a Thomas Sullivan in Kinsale in 1823 look like red herrings.
Posted by sb10 at 8:51 PM No comments: